Recently I visited San Antonio Texas where half the population lives on farms and ranches outside city limits. People raise cattle and other livestock which requires good fencing, to keep the animals from wandering off. In addition to barbed wire, electric fences and chicken wire people build stronger metal fences near the entryway and driveway leading up to their houses. This is a popular ritual, even people who don’t have animals usually have a gate across their driveways to provide security and privacy.

Anyone who’s visited a ranch knows about these long metal swinging gates. They work pretty well (unless kids have been riding on them) and are effective property markers. I’ve seen them in use in the mountains of Colorado, ranches in Texas and just about anywhere else that people are living on two or more acres. They are useful and economical, the only downside is that they’ve traditionally required a lot of effort to use.

Imagine getting out of your truck or car each time you arrive “home” finally after a long day in town or hauling loads across the countryside or mountains. You’re back, but you’re not really there yet. You have to stop your car, get out and unlock the gate or just loosen the chain. Swing the gate open and maybe tie it up, then you get back into your car, drive through and park again. Get out and close the gate. That’s five steps total and that’s a waste of gas (whether your car is idling or using extra energy to stop and start twice). It’s no wonder that electric gate openers are in widespread use across the country. Much like a garage door, these devices usually rely on a car battery to prop the gate open and then close it 30 seconds later. They are secure, reliable, and they save a lot of energy.

These gates use car batteries in most cases because they are cheap, convenient and much easier to place than wires running from the main house. The jump from stand alone batteries to trickle charged batteries operating off of a small panel took less than a nanosecond. Trickle charging is one of the best ways to charge batteries, adding to their lives, and the panels don’t have to be too large to make it all work. Just like the panels you might see on roadside emergency phones, lights and even trashcans, these work great for solar powered driveway gates.

Just below are several images and descriptions of these solar powered gate systems. First up is a complete shot of the light poll with the solar panel attached, the electronics box and the gate with the electric motor. 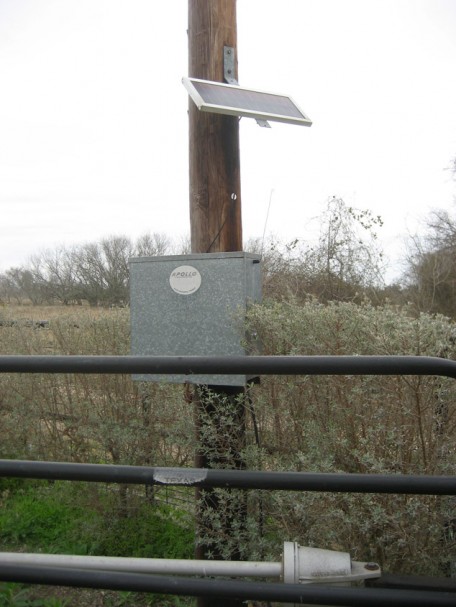 Next is the back side of the mini solar panel (this one was made by UNI-SOLAR) used to charge the car battery inside the electronics box which opens the gate and controls the remote control activator.

Just below is an inside shot of the car battery and electronics printed circuit board (PCB) that controls the gate and sets the security code. This particular unit was made by Apollo Gate company and is from 2001. Not much to it really, the battery connects to the control unit and there is a radio receiver for the remote (works just like a garage door opener) and a few pins that control the opening code. There is also a turn key and button on the exterior of the box which can be disabled. Apollo sells swing gate and slide gate systems depending on your taste as well as barrier arms (think railroad tracks only smaller) and there are keycode boxes that can be mounted on the driveway if the remote control isn’t your style. Using the small solar panel and trickle charge setup the battery will last years and the entire system can run $500 or less if you’ve already got fencing in place and it will save you a lot of  hassle, gas and frustration (especially if it’s raining). 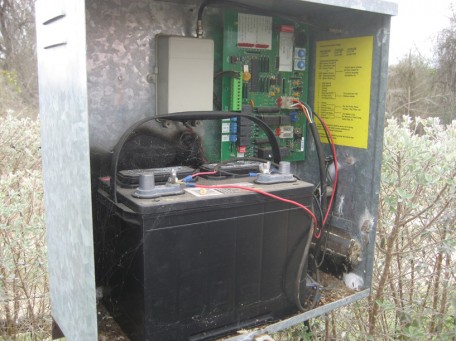