Keep reading to learn what solar energy is, how solar panels work and how installing solar panels on your home saves you money.

The Basics of Solar Energy

Let’s talk your burning question first: What is solar energy?

Solar energy is radiant energy emitted from the sun composed of photons (light) and radiation (heat). We use this energy in multiple ways, including converting photons from the sun into electricity via photovoltaics.

As NASA defines it, the photoelectric effect causes some materials to absorb photons of light and release electrons. We create solar-powered electricity by capturing the electric current generated by these free electrons. This process is the foundation for modern solar power technologies.

A residential photovoltaic system consists of solar panels, a solar inverter, a meter, potentially a solar battery, and a few other components (mounting, cabling, etc.).

In this article, we’ll introduce the main components of residential solar power systems, dive deeper into technical details and teach you more about solar energy.

How Solar Panels Work: The Basics

Here’s a basic overview of a solar panel system, its main components and how solar panels work.

Solar panels collect sunlight and convert it to DC electricity.

The meter tracks how much electricity the panels generate.

*Note: Some solar electric systems will use batteries to store unused electricity. Look forward to a discussion of batteries in a future article.

A solar cell, sometimes called photovoltaic cells or PV cells, is the basic component of a solar panel. Solar cells are made of semiconductor materials, often crystalline silicon, and generate electricity as they absorb sunlight.

There are two types of crystalline silicon. Monocrystalline silicon is the most common material used in residential systems. This material lends itself to the solar panel’s iconic square-ish structure, and its high silicon content makes the sunlight-to-electricity conversion more effective (and more expensive) than other panel materials.

The other type of crystalline silicon, polycrystalline, is cheaper but less effective. Polycrystalline panels are usually only installed when plenty of space is available, such as a solar farm.

A solar inverter is essential to any solar system. Because the electricity generated by solar panels is direct current (DC), you need to convert the electricity to alternating current (AC) to use it in your home.

There are different types of inverters for solar use (string, central, micro). If you’re hoping to install the system yourself, selecting the best solar inverter will require serious research and careful planning. If you work through a professional solar installer, the company should choose a solar inverter for you.

DC is an electric charge that flows in one constant direction. Solar cells and batteries are DC.

AC is an electric charge that periodically reverses direction. The outlets in your home are AC.

Any home solar system that’s tied to your local electric grid will use a bi-directional meter, which is usually provided by your utility company. When you use electricity from the grid, you’ll see your meter move forward. But when your solar panels produce electricity, any electricity you don’t use will go back into the grid and your meter will run backward. This is called “net metering,” and the utility company will credit your bill for the excess electricity generated.

Net metering doesn’t apply in every municipality, so check with your local utility company about any specific rules and regulations.

Solar batteries allow you to store electricity and then draw on the energy when you need it, even when the sun isn’t shining. These batteries are an option for homeowners who want to live completely off the electrical grid, reduce power consumption after sundown or want backup electricity in case of a power grid outage.

There are many types of solar system batteries, each with varying designs and chemical components. Power banks, like Tesla’s Powerwall, are among the most common installation options for residential solar setups.

Why Get Solar Power

Investing in solar energy is a significant commitment in time and money. The average installation can cost upward of $25,000 before rebates, and most solar power installations continue producing energy for more than 20 years. But there are significant benefits to installing solar panels on your home or small business.

The foremost reason to install solar power is to reduce the cost of electricity bills. Depending on how much electricity you use on average and your monthly energy bill, installing a solar system might pay for itself over time in savings. Use our energy savings calculator to determine if solar power is a great fit for your home or small business.

The smallest solar system Blue Raven Solar installs is a 10 panel (3 kW) Installing solar power at your home can drastically increase your property resale value. According to a Lawrence Berkeley National Laboratory study, each 1-kilowatt (kW) increase in a rooftop solar system adds $5,911 to a home’s resale value.

As a bonus, if you decide to move before you’ve paid for your solar system, most solar power installers will transfer the terms of your lease, loan or payment plan to the new homeowner.

This lower limit does not apply when adding onto existing systems.

The environmental toll of using fossil fuels for our energy needs is enormous. Widespread adoption of solar energy is among the most effective ways to combat our reliance on fossil fuels, and it has numerous health and economic benefits, too.

The DoE also states hitting this solar goal,  known as SunShot, can also:


What You Need to Know About Solar Power Systems

Solar energy and solar power systems are complicated. Below, we break down some of the common concerns and provide resources for you to learn more.

How Much Power Will My Panels Generate?

Solar power electricity generation largely depends on where you live and how much daily sunshine your home gets.

The National Renewable Energy Laboratory (NREL) created a solar PV map showing the annual average “solar insolation” across the United States. The map should give you a general idea of the amount of solar insolation to expect, on average, throughout the year.

Solar Insolation (or Irradiance) Solar insolation is a unit of measurement used in the solar energy industry. It measures solar radiation energy (sunlight) in an area over time. The most common unit is kilowatt-hours per square meter per day (kWh/m2/day), as seen in the map above.

There are more specific questions you’ll have to ask yourself about your location and home—e.g., is my next-door neighbor’s oak tree going to block all my sunlight? You’ll also have to consider local weather conditions. Luckily, there are plenty of other resources to help you find your solar potential.

How Much Does Installing Solar Panels Cost?

A residential solar PV system can cost anywhere from $25,000 to $35,000, on average. Because of the high cost, a power purchase agreement (PPA), loan, or lease are popular options for financing a solar PV system. Naturally, there are benefits and drawbacks with each option. We won’t cover them in detail here, but you can learn more in our article “Financing Options for Solar Power Explained.”

The Types of Solar Panels

Most home solar panels are made of monocrystalline silicon (more efficient, more expensive) and are around 3.25 feet by 5.5 feet in size. Solar shingles are also a new technology gaining ground in the industry.

Some solar installers have proprietary mounting systems and solar panels, so the size and type of panels you get may differ slightly from the average.

Once you figure out how much power you want to generate, a residential solar provider should be able to tell you which panels will work best for your situation. You can also play around with the PVWatts Calculator—listed in our Solar Tools section—to see estimated outputs for different module types.

How Long to Solar Panels Last?

Modern solar panels typically last twenty to thirty years before there’s a noticeable increase in output loss. Most residential solar providers offer a 20-25 year warranty, but many such warranties only guarantee a certain power output (e.g., a guarantee of 80% output for twenty years). Carefully read through the fine print to make sure you understand the warranty and what it covers.

Be sure to research the solar panels a solar provider offers. Solar panels can be anywhere from 5% to 20% efficient, and they lose efficiency over time–some faster than others. An average monocrystalline silicon solar module will lose efficiency at a rate of about 0.36% a year, which is low in comparison to other types.3

How Much Do Solar Panels Save on Electricity Bills?

It depends on your energy consumption and the energy output of the solar PV system you install, but there are plenty of tools available online to help you calculate your potential savings. Our own solar energy savings calculator will provide you with a rough estimate.

How to Calculate the Number of Solar Panels Required

Well, how much electricity do you use each month, and how much do you pay for it? For example, if you want to have 25% of your electricity consumption covered by solar, finding the answer is simply a matter of calculation. We’ve provided a link to an easy-to-use sizing calculator—see the Grid-Tie Estimator in the Tools section.

For a point of reference, the average electricity consumption for a US residence is around 900 kWh per month.1 The price of electricity varies by state, but the US average is just under $0.13 per kWh.2

Where to Buy Solar Panels

The chart below shows some of the largest and best-rated residential solar providers across the United States. If you’d like to learn more.

Most solar providers have tools or a list of serviced states on their websites to let you see if service is available in your area.

There are also websites that list multiple residential solar providers and installers near you when you provide a ZIP code, but provider information isn’t always verified. We recommend checking more than one source—or getting a personalized quote—to verify information whenever possible.

How to Get Solar Power

The quote discussion will review your average electricity bill, home layout and goals with solar energy. Afterward, you’ll be given a quote with how much you can save and a rough estimate of how much a solar system will cost. If you decide to move forward with the process, then your solar provider will performance in in-person home inspection to design the solar array and identify any structural issues. After that, it’s installation time!

There’s a personal tax credit available to you for “30% of qualified expenditures for a system,” but the system must be installed by December 31, 2019. See Energy.gov for more details.

There are too many state tax credits to list here, but DSIREUSA.org, a website funded by the US Department of Energy, lists tax policies and incentives state by state. The website is easy to use, and we highly recommend you check it out.

The PVWatts Calculator tool comes from the National Renewable Energy Laboratory (NREL), and it can help you “easily develop estimates of the performance of potential PV installations.” It has some advanced features, so it helps to do a little research on what you want out of your solar PV system beforehand.

Once you have all the needed information, you can  run a simulation that will give you detailed results,

You can even draw your solar PV system on your roof using Google Maps. 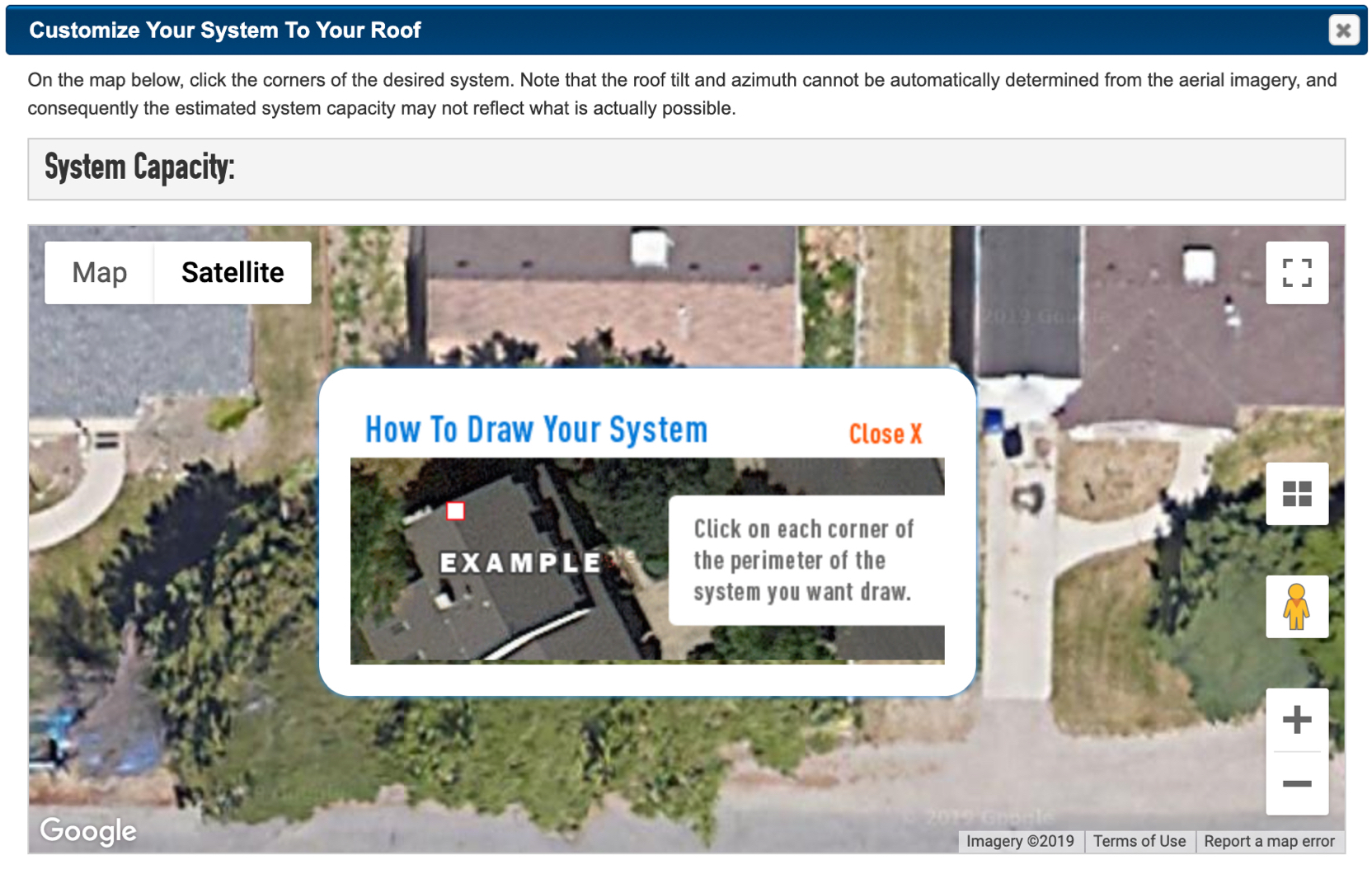 Project Sunroof uses the Google Maps database to help you see if a solar PV system is suitable for your home. The tool is intuitive and among the most accurate options we’ve discovered.

We think it’s a good time to invest in residential solar. The cost of a solar system has decreased significantly over the past few years, making it more affordable and accessible. And with solar technology continuing to advance, residential solar systems will become more efficient, making them even more feasible for homeowners.

Ready to start saving with solar? Check out some of our top solar brands or get a free quote!