There are two common ways to collect energy from the sun. One is to use a thermal solar collector to gather the sun’s heat and the other is to use a photovoltaic (PV) array which converts the sun’s energy to electricity. Which is better?

In the case of solar thermal, the conversion efficiency is much higher than PV. You can extract as much as 70% of the sun’s energy with a solar collector, which is accomplished by circulating a fluid through a solar panel collector and capturing the heat rise that naturally occurs when the sun shines on the collector. On the other hand, a PV collector will only convert about 12% of the sunlight into electrical energy on average. A general rule of thumb is that the energy available from the sun is about 1kW per square meter. This translates to about 3400 BTU/hr per square meter. If you can get 70% of that heat using thermal solar collector, then you would only need about 42 square meters (450 sq. ft) to generate as much heat as a typical home’s gas furnace (100,000 BTU/hr). Another advantage is that solar thermal panels only cost a small fraction (about 20%) of what PV panels cost per square meter. When you combine 6 times the efficiency with 5 times better pricing, you get something that is 30 times better, right? Well, not exactly. 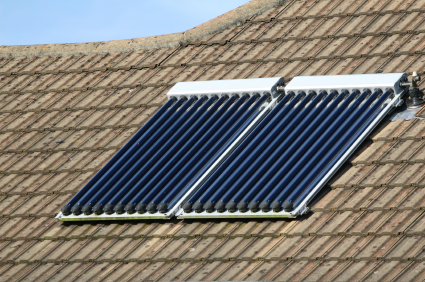 A furnace is by far the largest energy user in a typical household in North America, consuming as much as 10 times the energy when it’s running as an average house uses in electricity. In my own home in Colorado, by looking at my gas bill, I computed that during this past December my furnace ran about 30% of the time. So the average heating load was 33,000 BTU/hr. This is equivalent to 9.7 kW, or about 10 times my average electric usage during the same month. I should also mention that natural gas costs about 1/3 as much per BTU as electric resistance heating. So my gas bill wasn’t 10 times as much, but closer to 3 times as much as my electric bill for that month.

If solar thermal is so much more efficient and less costly, and my heating needs require up to 10 times the amount of energy as my electrical needs, then why isn’t solar thermal space heating generating as much interest as PV solar these days?

There are several reasons for it. One is that heat is very difficult to store and distribute. The only way to store heat is with a thermal mass. Passive solar homes, that is, those with solar systems that have no moving parts or liquids, generally use masonry to store and release heat to achieve a comfortable temperature equilibrium. This is done by constructing the home so that it has a large south-facing window and a large thermal mass such as thick masonry walls and floors to hold the heat. But a house generally must be designed with the passive solar collector from the start. It would be difficult to add a passive solar collector to an existing house. More commonly to retrofit an existing home with solar heat, one would use an active solar system with a fluid to extract, store, and then distribute the heat, and that requires a large insulated water storage tank in the house to hold the heat. If you wanted to store enough heat for an entire day’s heating for my home during a cold winter day (33,000 BTU/hr x 24 hours), it would require a tank that held 2500 gallons of water (assuming a 40 degree temperature delta). By temperature delta, I mean how much temperature change could occur before the hot water was no longer effective at heating the house. My estimate is that the water would be raised to around 160 degrees in the tank and that once it got below 120 degrees, it would lose its effectiveness at radiating heat.

As a side note, solar thermal could be used for radiant floor heating but you need lower water temperatures for that application, usually around 85-120F, and so you couldn’t heat the water to a very high temperature and thus you’d need an even bigger tank to store equivalent energy. However, I can envision a system that employed radiators (which require water at 120-160F) and radiant floor heating that take advantage of the water once it got below 120F. If you could do that, then the deltaT could be expanded to 75 degrees, allowing for a smaller 1300 gallon storage tank. Needless to say, this would add considerable complexity to the system and would likely need to be designed into the house prior to construction because radiant floor heating is quite difficult to retrofit in an existing house.

In the scenario I mentioned previously where a solar collector would need to be around 450 square feet to match the size of a house furnace, I didn’t take into consideration that the sun doesn’t shine all the time. In Colorado in the winter time, the sun only averages about 4 hours of full intensity per day. That is about a 17% duty cycle and my house requires as much as 33% duty cycle from my gas furnace during the coldest months. So I’d need to double the size of the collector to 900 square feet to compensate for this shortfall.

Sometimes we get cloudy weather for several days in a row, so I’d need to have a backup system, likely a gas heater, to kick in when the water temperature fell below 120 degrees and could no longer heat the house. To help make all the decisions about when to circulate the fluid to the solar collector, pump the fluid to the various zones in the house, and turn on the gas heater when a backup is needed, it would require a computerized controller.

When you add up all the cost of the pumps, tank, controller, plumbing, radiators, and installation, the savings in fuel would take a long time to pay for the system. So that may be why, despite the significant advantage of solar collector panel cost and efficiency compared with PV systems, thermal solar space heating systems haven’t taken off. In addition, the system would sit idle about 6 month out of the year when I don’t need much heat. In several of those months, I need air conditioning and a solar thermal system wouldn’t do me much good for that application. A PV system could generate usable energy year-round, and would generate 50% more in the longer summer days when I tend use more electricity anyway.

Using a solar thermal system to provide a home’s hot water seems like it has the potential to make more economic sense. After space heating, hot water requires the most energy in a typical home. I will cover that in a future article.