Solar power has finally hit the college scene. Stanford University, located in silicon valley, California, is currently experimenting with solar panels on campus as a renewable energy source. Universities use a huge amount of energy on average, and Stanford is looking toward solar energy to help reduce its carbon footprint on the environment.

This year, Stanford Housing has worked with Stanford’s own Civil and Environmental Engineering program to try out two different solar powered water heating systems on a select number of dormitories, including Roth and Robinson House, to heat the student’s showers, sinks, and dorm kitchenettes. 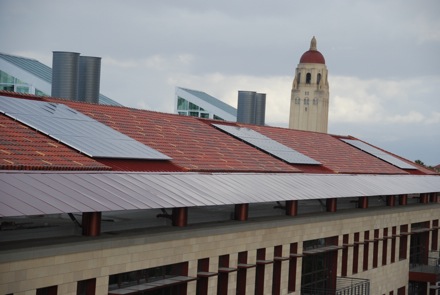 The Synergy House on campus, known for its environmentally-conscious residents, has also had a 10-kilowatt solar photovoltaic system installed. This system was fitted and partially paid for by the students and Synergy House alumni themselves, who worked in tandem with Stanford Student Housing on the project.

Even the university president has gotten in on the solar action. The Hoover House, which houses Stanford’s university presidents, was graced with 252 polycrystalline solar panels, producing 40 kilowatts, in September 2008. This makes the Hoover House the largest photovoltaic project on campus, and since the house is often used for public events that use more energy than a normal house, it makes hosting parties much more eco-friendly.