Is the Future of Solar a Tiny Antenna?

A new approach to capturing solar energy has been developed by researchers at Idaho National Laboratory (INL), Microcontinuum Inc. and Patrick Pinhero of the University of Missouri. The concept is novel: stamp small conductive nanoantennas onto a thin, flexible sheet of plastic. Each nanoantenna is a small square spiral about 1/25 the diameter of a human hair. 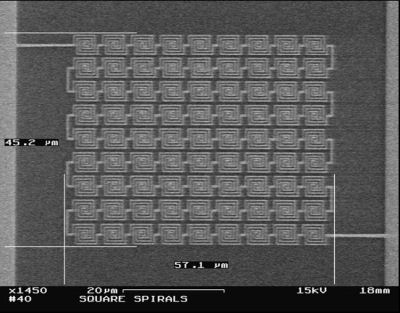 (above: Electron microscope view of an array of nanoantennas.)

“Because of their size, the nanoantennas absorb energy in the infrared part of the spectrum, just outside the range of what is visible to the eye. The sun radiates a lot of infrared energy, some of which is soaked up by the earth and later released as radiation for hours after sunset. Nanoantennas can take in energy from both sunlight and the earth’s heat, with higher efficiency than conventional solar cells.”

“I think these antennas really have the potential to replace traditional solar panels,” says physicist Steven Novack, who spoke about the technology in November at the National Nano Engineering Conference in Boston.”

The researchers believe that the nanoantennas can be produced using a continuous roll-to-roll process.  One of INL’s partners, Microcontinuum, Inc., specializes in this manufacturing process.  Although the process has not been perfected yet, they have demonstrated the imprinting process using a six inch circular stamp that contains 10 million nanoantennas. 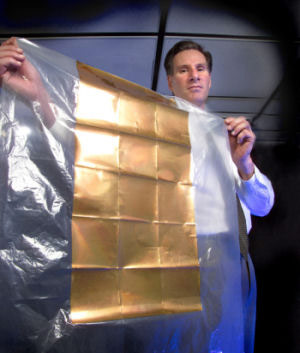 (above: Steven Novack holds a plastic sheet of nanoantenna arrays.)

Why is this new technology so exciting?  Researchers believe that the nanoantennas can absorb up to 80% of available energy, a vast improvement over a typical solar panel which absorbs less than 20%. The antennas can also absorb energy radiated back from the earth after the sun has set.

The materials used in production will help keep the price low.  Demand for silicon, the semiconductor used in the majority of photovoltaic panels, continues to grow, which keeps the price high.  The nanoantennas can be produced with semiconductors other than silicon, and they can be printed on the same plastic that’s used in bags and plastic wrap. “By focusing on readily available materials and rapid manufacturing from inception, Novack says, the aim is to make nanoantenna arrays as cheap as inexpensive carpet.”

Although the research team has made great progress, there are still issues that need to be worked out before the nanoantennas can be mass produced.  One problem the team faces is the complex interaction when you combine millions of the antennas. They are using computers to model these interactions and fine-tune the efficiency of the entire array of nanoantennas. The antennas can also produce a large electromagnetic field which may damage the production materials. There are also problems with storing and transmitting the generated electricity.  “Although infrared rays create an alternating current in the nanoantenna, the frequency of the current switches back and forth ten thousand billion times a second. That’s much too fast for electrical appliances, which operate on currents that oscillate only 60 times a second. So the team is exploring ways to slow that cycling down, possibly by embedding energy conversion devices like tiny capacitors directly into the antenna structure as part of the nanoantenna imprinting process.”

Despite these problems, the researchers at INL are positive the issues can be overcome. Promising exploratory research is under way, and they believe that in a few short years you will be using nanoantennas to charge portable batteries and coat the roof of your home.